The tragedy of the Mottarone cable car has struck four families, two residents in Lombardy, one in Emilia Romagna and one in Calabria. In particular, a family residing in Pavia he was of Israeli descent.

Roberta Pistolato, 40 years just today, and Angelo Vito Gasparro, 45, who died in the Mottarone accident, were husband and wife residing in Piacentino, both originally from Bari. The couple had lived for some time in Castel San Giovanni and he was on a trip to Lake Maggiore to celebrate her birthday. The family in Puglia, however, has not heard from him since 11, when the 40-year-old sent the last text message to her sister: “We are going up to the cable car “. Roberta was fresh from her medical studies and worked as a medical guard at the Piacenza local health authority.

The cabin of the cable car between Stresa and Mottarone comes off: “14 victims. A badly injured child. The system cable has come loose “

Silvia Malnati, Age 27 and Alessandro Merlo, aged 29, were two boyfriends from Varese. Silvia she was employed in a cosmetics shop in Milan. Passionate about nature, sea and mountains, they went on a trip out of town together. 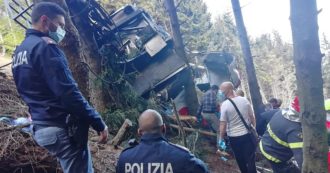 Mottarone Stresa cable car, the cabin fell 100 meters from the last pylon before the arrival station

Serena Cosentino, 27 years old from Diamante, a few months ago she had moved to Verbania where he had won a competition as a research fellow at the Cnr Institute of Research on Waters taking up service on March 15th. Previously he had studied at the Sapienza in Rome. Her boyfriend also died in the accident Mohammadreza Shahaisavandi (23), Iranian. He is also a resident of Diamante, but he lived in Rome where he studied. The boy had gone to visit his girlfriend in Verbania and together they had gone on a trip to the Mottarone. Serena had celebrated her birthday on May 4th.

Among the victims also an Israeli family residing in Pavia: Amit Biran , born in Israel on February 2, 1991, Tal Peleg born in Israel on August 13, 1994 and the son Biran Tom, born in Pavia on March 16, 2019. The other son of the couple, who was with them, was transported in very serious conditions to theRegina Margherita hospital of Turin but it is not yet known whether he is the surviving child. The Biran family had gone to the town of Lake Maggiore for a trip. Amit Biran, since 2018 was enrolled at the University of Medicine of Pavia. With them Barbara Konisky Cohen, born in Israel on February 11, 1950 e Itshak Cohen, born in Israel on November 17, 1939. Finally there was Vittorio Zorloni born in Seregno, Milan, on 8 September 1966, residing in Vedano Olona (Varese).